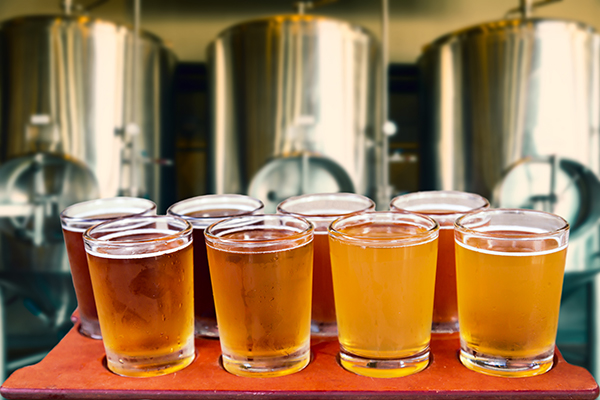 Where to Find Our Brews - Click Here to View our Locations

Currently on Tap at the Brewhouse 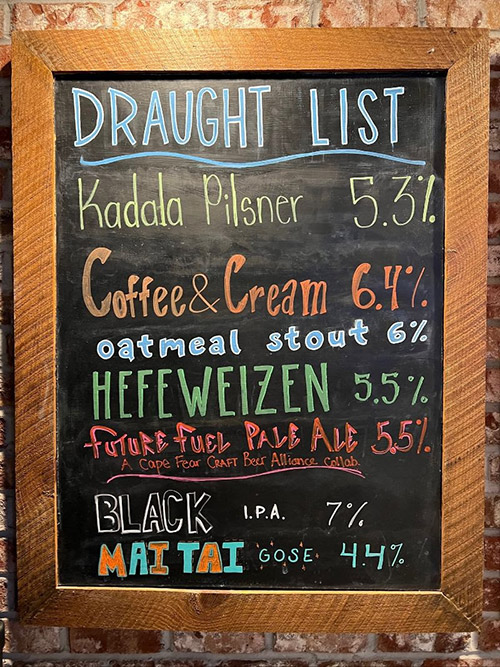 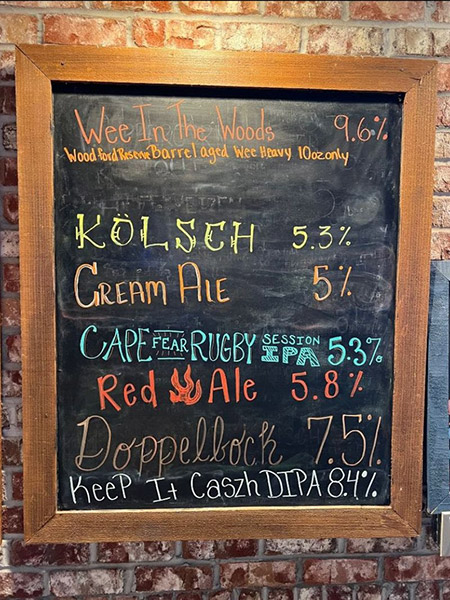 Kölsch. A smooth and crisp, delicately balanced beer German-style beer with its origins in Cologne, Germany, our Waterline Kölsch has a subdued maltiness at first taste but finish with a pleasantly refreshing, citrusy tang rounded out by the lightest touch of hops for some flavor without bitterness. Not only is this coolly refreshing on a hot North Carolina afternoon, but take some home in a growler and it’ll go great with an afternoon lunch or the evening meal. It’s also really our “gateway” beer for folks who want to experience craft but aren’t sure exactly where to start and since it’s lower gravity it makes a nice session beer.

American Pale Ale. Popular across the country as a less hoppy version of an IPA, our Waterline Pale is brewed using American ingredients and attitude. A deep rich amber in color, this beer has a fairly moderate hop aroma that we get from dry hopping and late kettle additions. It’s an American Pale Ale, so we only use American hop varieties to provide a pronounced hop flavor and bitterness that lingers into the finish. Overall refreshing and hoppy, this beer is one of our brewer’s favorites!

India Pale Ale. Brewed to survive the voyage from England to India in the 1800s, India Pale Ales, or IPAs, have been and still are one of the the most popular style beers in the American craft brewing revolution. Our Waterline IPA is a step back from the crazy bright West Coast style with a beautiful clear copper color, moderate hops aroma and of course as all "hop-heads" want a big hoppy flavor and bitterness.

Tripel. Originally popularized by Trappist monasteries in Belgium, our Waterline Tripel is higher in alcohol content than our other beers and brings a very distinctive aroma and flavor. We’re brewing this beer with European Pilsner malt, candi sugar, and special Belgian yeast strains. Served in a 10 oz. snifter, you’ll experience the distinctive complex aromas and soft spicy, flavors. Deep gold color be sure you notice the “Belgian lace” on the glass as it fades while you drink it.

Red. An easy-drinking pint, our Waterline Red is malty and hoppy in an interestingly delicious American focus on the style. Hold your glass up to the light to admire the deep reddish copper color, stick your nose into the glass to fully appreciate the enticing malty smells with underlying hops and maybe toffee and butter. Of course, we like things different so we’re amping up the hops and taking it to the ragged edge of beer judge style guidelines. Traditional…but not really. This is easily our favorite beer; we know you’ll love it too!

Oatmeal Stout. Rounding out the color spectrum, our Waterline Stout will be an oatmeal variety that you’ll immediately enjoy.  It has a light sweetness that you wouldn’t expect in such a dark beer. You’ll find it served up with a thick tan-colored head and as you drink we think you’ll find hints of chocolate and coffee and cream imparted by our special mix of oats and the dark roasted grains. If there was ever a breakfast beer, this is it! Yum. Yum. Yum.